The Central Florida Scottish Highland Games (FL) was held on January 14-15, 2017 in Winter Springs, Florida. Blue skies and gentle breezes greeted the fifty-five clans participating and Clan Wallace was among them.  Russ and Marcia Harper, along with Captain John Wallace hosted the Clan Wallace tent.

The parade of tartans was held at noon on Saturday and Sunday. We were honored to have a novice Piper Chris Lancaster and his family joins us, along with Marilyn and Neil Wallace, to join us in the Parade of Tartans. 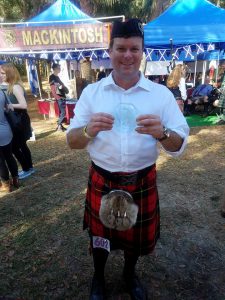 The entertainment included the Albannach, Breakers, Off Kilter, Rathkeltair, Enter The Haggis, Guilane and Smillie, Men of Worth and The Kilted Creature.   Rosie O’Grady’s Highlanders, Jacksonville Pipes and Drums, Harp & Thistle Pipe Band, Pipes and Drums of the Orange County Sheriff’s Office and The Orlando Firefighters Pipes and Drum bands played for us at the games.  The Games included heavy athletics, Border Collies, Irish, Highland and Scottish dancing, Battle Ax Competition, Shortbread Competition, and Children Games.

Congratulations to society member Chris Lancaster for coming in first in the Novice Piping competition.

Thanks to all that came out and enjoyed the wonderful weekend with us.