What is a Clan Wallace Gathering?

It is a fun filled time for the Family of Wallace with camaraderie that can’t be beat. It is a unique blending of Scottish heritage and locale events and attractions. It is a biannual meeting of our members in a location designated by the board to significantly represent our Society. The event normally includes Festivals, Highland Games and other Scottish traditions. Each Gathering has been unique, with events planned to facilitate fellowship during activities that embrace our Scottish Heritage. Learning about the Wallace Family and Scotland’s National Hero, William Wallace is the key to every gathering.

How did the Clan Wallace Gatherings Begin?

Halifax, Nova Scotia, 1999 Tom Wallace initiated the idea of a Gathering in 1998 and approached the Board with a proposal to host an event in Halifax during 1999. Because there were so many activities happening in Halifax that year, he thought that it would be a great venue. He sure was right!!!! Tom orchestrated the 1st Bi-Annual Gathering in grand style. He arranged for Clan Wallace SocietyWorldwide members to have tea with the Mayor of Halifax and tour the Nova Scotia Governor’s Palace. The Wallaces’ attended the Military Tattoo on Canada Day as well as a parade in town. Tours of the area were arranged and attended by the group. There were Highland Games, a formal Banquet and a pub night. 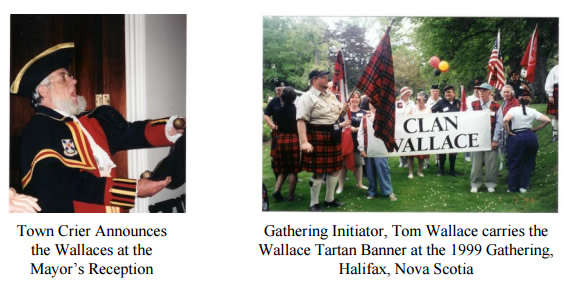 How did the Spirit of the Gathering Continue?

Jamie Wallace of Newburgh Ontario put together the next Gathering two years later to continue the new Clan Wallace Society tradition. David Ross, the author of the book, On the Trail of William Wallace was a guest of the Society and speaker. The Fergus Highland Games were the centerpiece of the gathering. In addition the Wallaces visited an aviation museum, and a Legoland center. Jim Bowie Wallace is shown wearing an Egyptian funeral mask made out of Legos. There were many opportunities to socialize and a fantastic dinner. 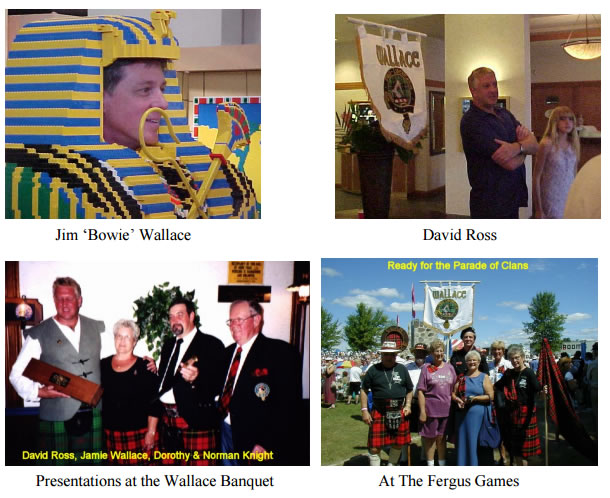 Having participated in the Halifax and Fergus Gatherings, Dick and Jan Wallace of Marysville, California thought it was time that the Gathering be held in the United States. They incorporated a whiskey tasting presented by John Wallace; a geneology class taught by Kay Caylor; The Reno Highland Games; a Banquet with professional entertainment; and a Kirkin of the Tartan conducted by Russ Caylor with a final farewell breakfast. Sight seeing and casinos were available and participates had enough free time to enjoy them. Many Wallaces formed small informal groups to sight see.

2005 was the 700th Anniversary of Wallace’s Martyrdom—–What a wonderful time for Clan Wallace to go to Scotland. So the plans began with The Board deciding a professional tour company would make the arrangements directed by the CWS Board working with Clan Wallace Society event coordinator, Lois Wallace. Fifty Wallaces were on a bus and several families followed in cars on the inaugural Clan Wallace Society trip to the home of their ancestors. A pre tour attended The Abernathy Games, toured the Grant Distillery, Culloden, Loch Ness, Loch Lomond, Inverness and the Isle of Sky to get the flavor of Scotland. The main tour concentrated on William Wallace by visiting his birthplace in Elderslie, The National Wallace Monument, Stirling Castle and the Smith Museum. The group participated in the Wallace 700 Parade in Aberdeen and the following wreath laying ceremony at the Wallace Statue. CPT John Wallace presented the Society wreath. Local children performed a pageant which depicted William Wallace’s life. The Provost of Aberdeen held a reception for Dick and Jan Were Piped Into the Banquet Whiskey Tasting 4 the Wallaces. A dinner with Chief’s son Andrew (heir apparent) in Edinburgh was an opportunity to get to know our next chief. The Rosslyn Chapel, St. Andrews Golf Course, The Scottish Parliament Building with the Freedom Papers, Edinburgh Fringe Festival entertainers, Edinburg Castle and the Military Tattoo were other highlights of the Gathering.

The 5th Biannual Clan Wallace Society-Worldwide Gathering (CWS) The Clan Wallace Society held its fifth bi-annual Gathering in conjunction with the 30th Williamsburg, VA Scottish Festival in late September. More than 100 Wallaces from throughout North America enjoyed four days of fellowship and visited sites vital to American history such as the Yorktown battlefield and (British) surrender site. The Gathering was definitely a family affair as several family reunions took place as part of the event. Old friendships were reestablished and many new friendships were made amongst the Wallaces from Canada and 18 states both east and west of the Mississippi. 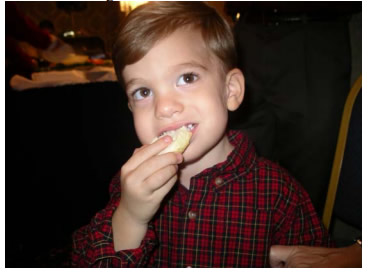 Smith Museum with the Provost (Mayor) of Stirling CAPT John Presenting the Clan Wallace Society Wreath at the Wallace700 Ceremony in Aberdeen 5 Clan Wallace was the honored clan at the Williamsburg Scottish Festival so lead the march of clans and was furnished a large tent right next to the reviewing stand. President Bill Wallace and his wife Norma, representing Ian Francis Wallace, of that Ilk, Chief of the Name and Family of Wallace, were piped onto the field, made brief remarks, and participated in ceremonies at the reviewing stand. Bill and Norma also represented our chief at the Festival’s Balmoral Reception on Friday evening preceding. The grand finale of the Gathering was the formal banquet and awards ceremony on Sunday evening. President Bill Wallace presented two President’s Awards and two Awards of Appreciation for outstanding service to the Society. 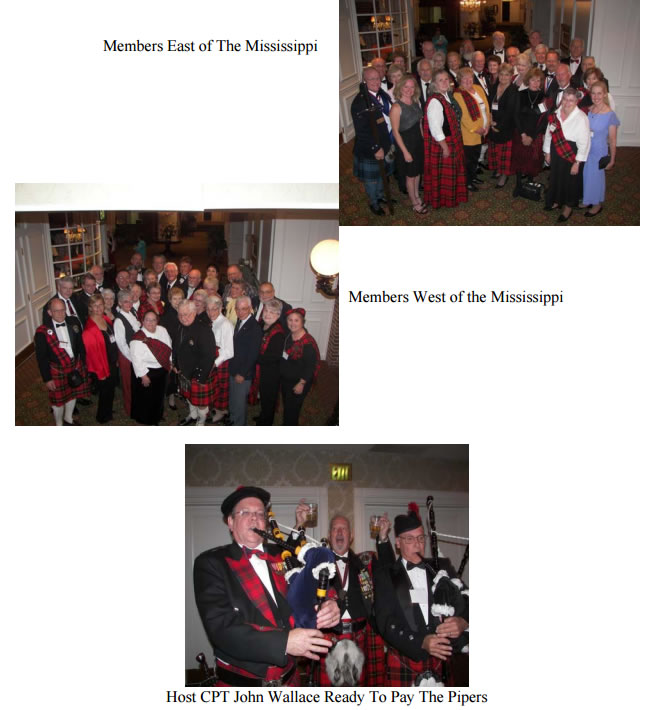 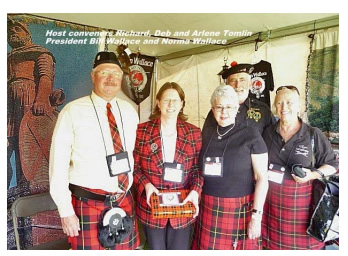 The 6th bi-annual Gathering of the Clan Wallace Society was held in conjunction with the 33rd Longs Peaks Scottish/Irish Highland Festival. As one of the honored clans, the Society marched at the front of the parade through the city of Estes Park and had a very large tent in front of the other clan tents.. ‘Our’ High Desert Pipes and Drums of Albuquerque also marched, but sadly not with the Society. The Gathering wrapped up with a nice breakfast where President Bill Wallace passed the Wallace Sword to incoming president Bob Wallace of Dayton, NV. Everyone enjoyed the meal and an extensive raffle that included Wallace labeled wine and a beautiful framed photo to the statue of William Wallace on the National Wallace Monument in Stirling. 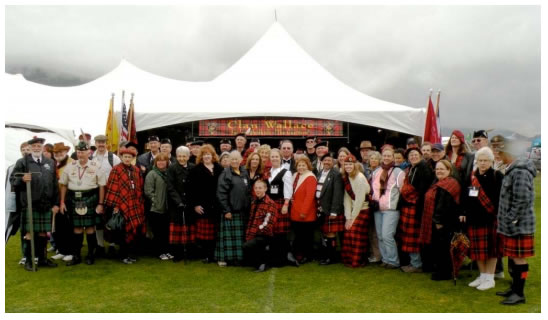 The 7th bi-annual Gathering of the Clan Wallace Society will be held in conjunction with Calgary Highland Games and the Canmore Highland Games. Host conveners are Deb and John Wallace. They convene at five games in Alberta. Those who attended the 2009 Gathering in Estes Park met Deb and John. 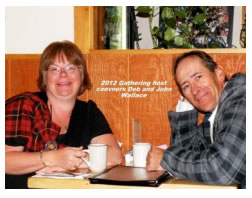 Members will visit both games held near the world famous areas of Lake Louise, Banff and the Canadian Rockies. Bus transportation will be provided from Calgary to Canmore and back for the Canmore Games. As of October 2010, event planners envision the following draft agenda.  Thursday: arrival and welcome reception in the evening  Friday: TBD breakout sessions and free time and banquet in the evening  Sat: Calgary Games  Sun: Canmore Games via bus transportation  Mon: Farewell breakfast and depart This Gathering presents a great opportunity to vacation in the Canadian Rockies before or after the Gathering. 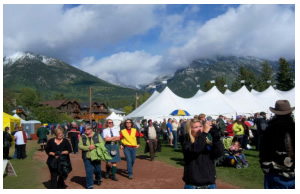