Surrounded by the strap-and-buckle circlet, upon a crest coronet a dexter Arm vambraced argent, the Hand proper brandishing a sword, Hilt or, all proper. (A right arm in silver armour, the bare hand brandishing a sword with a gold hilt.)

Gules, a lion rampant Argent within a bordure countercompony of the Last and Azure

LANDS – Ayrshire and Renfrewshire
ANTHEMS – “The Clan Wallace March” composed by Charles MacTaggart in 1985 and “Wallace the Brave” adapted from “Scotland the Brave.” 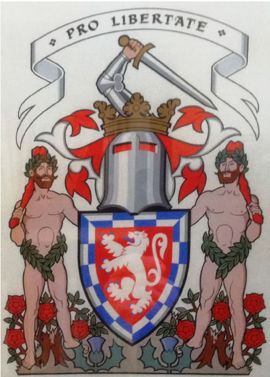 SUPPORTERS
Two savages wreathed about the head and middle with laurel, all Proper, each carrying on his exterior shoulder a club Gules, and trampling down a rose-bush Proper, Flowered Gules on a conpartment embellished with two plants of thistle flowering Proper 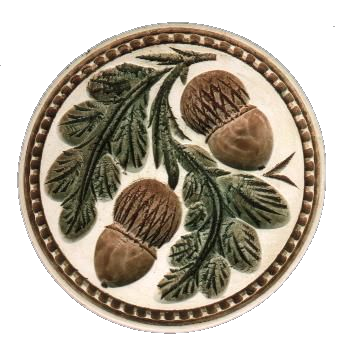 STANDARD
The Arms of Wallace of that Ilk in the hoist and of two tracts Argent and Gules, upon which is depicted the Crest three times along with the Motto ‘Pro Libertate’ in letters Vert upon two transverse bands Or