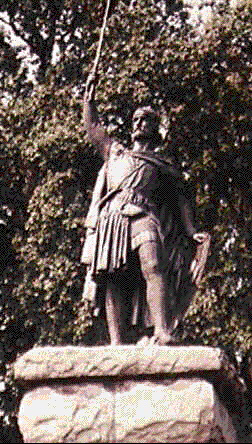 A Tribute to Scotland’s Greatest Patriot

The Wallace Memorial Statue in Baltimore, Md. The statue is located in Druid Hill Park near the Druid Hill Lake and outside of the Baltimore City Zoo.

In 1893 William Wallace Spence, emigrant from Edinburgh, supremely successful Baltimore merchant and financier, city commissioner and philanthropist commissioned the Royal Academy of Scotland artist D. W. Stevenson to improve on his already magnificent sculpture of Wallace on display at Abby Craig, shipped it to the shore of Druid Hill lake and offered it to the City and people of Baltimore.

Imagine 12,000 people surrounding the statue on the morning of it’s unveiling. Mayor Latrobe and nearly all of the city council were present along with the British consul and an escort contingent of the fifth Regiment, whose armory now stands where Spence’s mansion was located.

A procession of 160 Scots from the St. Andrews Society of Baltimore, their Sparrows Point contingent, and members of the Caledonian Club of Washington, DC had assembled at the Bicycle Club on Mt Royal, then marched with great pomp and ceremony around the south side of the lake and up toward the monument accompanied by the Pipes and Drums and a mounted escort of solders. They all wore bonnets decorated with eagle feathers, and plaids across their shoulders, some in full highland costume, and the leaders before them with the Stars and Stripes, the Saltire and the flag of the Society.