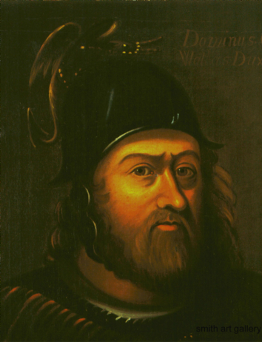 There are two theories for the origin of the Wallace name, both of which indicate an ancient British origin. First, the name of Waleis was common in England and around 1300 meant simply “Welsh-man”. The family was believed to be from Wales and held land in Shropshire and who may have come north with King David I.

The second theory is that they were Britons who settled in the ancient kingdom of Strathclyde, having been driven north in the tenth century. The name is certainly found in records by the twelfth century in Ayrshire and Renfrewshire, Richard Walensis of Riccarton held land near Kilmarnock as a vassal of the High Steward of Scotland sometime before 1160. His grandson, Adam Walays, had two sons, the eldest of whom succeeded to the family estates in Ayrshire. Malcolm, Adam’s younger son, received Elderslie and Auchinbothie in Renfrewshire. Malcolm was the father of the great Scottish patriot, Sir William Wallace of Elderslie.

Adam de Waleys appears on the Ragman Roll of nobles paying allegiance to Edward l of England in 1296, but Malcolm of Elderslie was one of very few Scottish nobles who bravely refused to submit to Edward. He and his eldest son, Andrew, were both executed. His wife fled with her younger child, William, to the protection of relatives near Dundee. William gathered a number of young men around him, including a cousin from the Riccarton branch of the family. When he heard that Sir John Fenwick, his father’s executioner, was marching towards Dundee with a packed train of plunder from Scottish churches and monasteries, he determined to have his revenge. He met Fenwick at the path leading over Lowden Hill in Lanarkshire and killed him. His success brought him many new followers, but to gain the support of the nobility he allied himself with Sir Andrew Murray, who was raising a revolt in the northeast. They were joined by the Graharns, the Campbells and the Earl of Lennox. There then began one of. the earliest guerrilla campaigns in military history. The English, unable to capture Wallace, indiscriminately executed a number of the Scots nobility, including his uncle, who had been lured into their hands to discuss possible peace terms. A full-scale revolt commenced in Scotland, but when a strong English army marched to suppress it, resistance melted. Wallace was forced to flee to the north, where he gathered a small force. By 1297, he had gathered enough popular support to lay siege to Dundee. The English sent another great army under the Earl of Surrey and Hugo de Cresslngham. Wallace met the English at Stirling Bridge. (See: The Battle of Stirling Bridge and the Battle of Falkirk.)

The Wallaces of Craigie, Ayrshire, are descended from Adam Walace of Riccarton, the uncle of the great patriot. They obtained the estate by marriage to the heiress of Sir John Lindsay of Craigie, and in 1669 Hugh Wallace of Craigie was created a Baronet of Nova Scotia. Sir Hugh married Esther Kerr, daughter of the Laird of Little Dean but sadly their only son was brain damaged. On Sir Hugh’s death, his grand-nephew, the grandson of his brother, the Rev. William Wallace of Falford, became the second Baronet. He was a distinguished lawyer who rose to the rank of Lord Justice Clerk, the second-highest judge in Scotland. The third Baronet left an only daughter, and was succeeded by his brother, Sir Hew Wallace of Wolmet. Sir Thomas Wallace was the fifth Baronet, and when his son, a captain in the Guards, predeceased him, the estates passed to his daughter, Frances. In 1760 she married John Dunlop of Dunlop, the friend of the poet Robert Burns. His eldest son, Sir John Dunlop, succeeded his maternal grandmother as sixth Baronet of Craigie, and assumed the name of Wallace.

The representation of the chiefly line then passed to another cadet branch, the Wallaces of Cairnhill, who had lived in Jamaica for several generations. Through marriage to an heiress, they inherited estates in Ayrshire at Busbie and Clancaird. In 1888, Captain Henry Wallace of Busbie and Clancaird established himself as chief of the name. Robert Wallace of that Ilk received both the French and the Belgian Croix De Guerre during the First World War. His son, Malcolm, who served in the Second World War, Korea, and Borneo, rose to the rank of colonel. He was succeeded by in 1991 by his brother, Ian, the thirty-fifth chief.