Ceud Mìle Fàilte – Scots Gaelic for “One Hundred Thousand Welcomes” – to the Clan Wallace Society, representing Scots of any Clan and others who wish they were Scots. 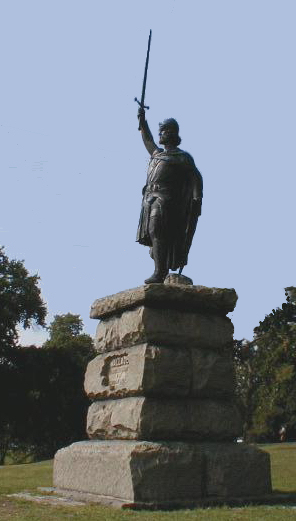 The Clan Wallace Society was founded and chartered in Texas in 1966 as a 501(c)(3) organization, promoting the history of and education about Scotland. In particular, Scotland’s Great Patriot, Sir William Wallace, who suffered martyrdom for his country in 1305; its Clans and Families, and the heritage and achievements of those claiming Scottish descent. Our current Chief is Andrew Wallace of that Ilk, 36th Chief of the Clan and Name of Wallace, and Honorary President of the Society. We have the pleasure of more than 1,400 members in the United States, Canada, Scotland, England, France, and as far off as Hong Kong, Australia and New Zealand.

Clan Wallace Society is represented at many Scottish Games and Celtic Festivals each year by Conveners who put up tents throughout the United States and Canada. Conveners representing Clan Wallace Society are volunteers who work individually with assistance from our, each of whom acts to further the goals of Clan Wallace Society’s Charter. In many areas across the United States and Canada, members get together as groups to support other local Scottish, Irish and Celtic historical events. To contact a convener in your region, take a moment to view our Convener List.

We welcome anyone wishing to participate in Clan Wallace Society activities. If you wish to join the Society, please click on the Clan Wallace Membership page and print the Membership Application Form.

The Clan Wallace Society is the only organization acknowledged by the Chief of Clan Wallace, who is recognized by the Court of the Lord Lyon, as representing the interests of the Chief, the Clan as a whole and the Society. Any other groups or claims may be misleading and possibly illegal in Scotland. We are not affiliated in any way with any political organization or philosophy in the United States or elsewhere in the world. We are not interested in espousing any political causes or positions and will not respond to requests for support, financial or otherwise. Please do not include us in any literature or Worldwide Web links that do not concern Scottish Heritage, Festivals or Games.

Thank you for visiting us! Sláinte