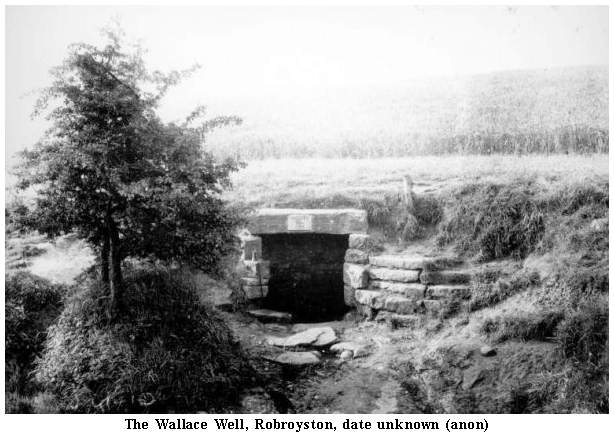 The Scots bard Blind Harry first mentioned the Wallace Well (spring) in his epic poem. William Wallace was captured at a farmhouse just a few yards from the well 706 years ago, on August 5, 1305. (The site of the nearby farmhouse was marked with a Celtic cross on August 4, 1900, the Wallace Monument). He was in Rab Rae’s Toun, Robroyston, on his way to Glasgow to plead with the Bishop of Glasgow, Robert Wishart, for help in his fight for Scottish Independence. The sympathetic bishop had supplied him with money, arms and food while he was on the run from the English. Wallace was betrayed by the farms owner, Rab Rae, to the “Scots” noble Sir John Mentieth, and was captured late at night by English troops and taken to London where he was hanged, drawn and quartered on a dubious charge of treason. Wallace’s close friend, Kerlie, who was with him when he was captured, was killed near the well. 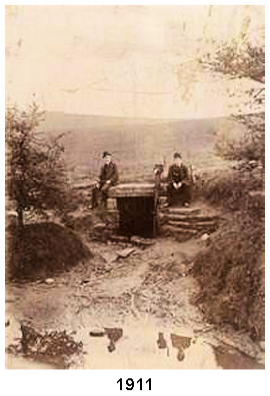 The Wallace Well was statutorily listed as a protected property in 1970. Historic Scotland deleted the site from a list of protected properties in March 1993. Historic Scotland says that the well was de-listed after a change of criteria, and it was decided that the site was of insufficient interest to warrant protection. For centuries people have called the site Wallace’s Well. Despite historians’ certainty that Wallace spent some of his last moments as a free man drinking from the spring, they say that Wallace’s connection to the site is unsubstantiated in documentary evidence. Even though the most respected historians throughout centuries of written documentation are in agreement that it is more probable than possible that William Wallace took his last drink as a free man at the spring. It would seem that the views of these experts is not enough proof to protect the site.

Since Wallace’s Well was deleted from Historic Scotland’s list of protected monuments, it has come under threat from housing put up by a Northeast developer. More than 800 houses have already been built in the development close to the site. The Society of William Wallace said that the well at Robroyston, Glasgow, was one of only a handful of remaining sites directly associated with Scotland’s great hero. The Society’s vice-chairman, Duncan Fenton, said; “Only in Scotland could an historic site like Wallace Well be allowed to come under threat. He added; “In recent years, the area around the monument and Wallace’s Well has been extensively developed. Although the monument is listed, the possibility of the well being swept away by an unsympathetic building contractor is very real. It would be a tragedy if we lost this site. It is one of the few remaining tangible links that we have in Scotland with our national hero. The preservation of sites of historic interest in Scotland has never been as good as in other countries; England in particular.” 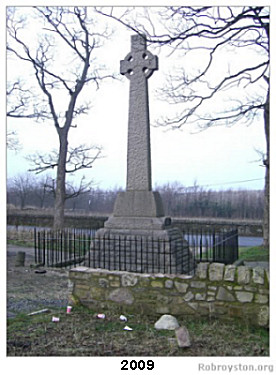 During the past decade, there was much pressure directed at Robroyston and Glasgow Councils and the developers regarding the preservation of the Wallace Well. As early as 1999, Historian David Ross and author Nigel Tranter voiced their concerns both publicly, and in newsprint. Ross took his message to the west coast Scottish broadsheet, The Herald, saying: “The memory of Wallace is being betrayed through ignorance and that has to be addressed. These sites are numerous throughout Scotland and should be major tourist attractions. Sadly, tourists just get off the plane at Glasgow and head straight to Stirling.” He also said: “There is no doubt that Wallace was captured on this site. The well is the place where he would drink. He stayed in a house just a few hundred yards away and that is certainly the site of his capture. Historic Scotland told nobody they were removing the listed status and it is only a matter of time before someone builds on this land. Before we know it one of Scotland’s most historic spots will become a building site.”

Nigel Tranter, author of “The Wallace,” added: “As a nation we are not very good at looking after our historic sites … It is not just maintenance that we have problems with. We do not commemorate enough of our history either. History is like the memory of a nation. If it loses that memory then it cannot expect to be respected. A nation stands or falls on its history”.

These Scottish historians, each of who possesses a keen interest in all things pertaining to William Wallace, as well as Scottish heritage preservation in general, enlisted public pressure and outrage at the neglect being suffered. The pressure continued through the press and the media, resulting in countless reports and articles during the last decade. Key supporters included The Scotsman, The Sunday Herald, The Daily Record Evening Times, and The News of the World. They protested the continuing loss of heritage sites due to the encroachment of residential development. 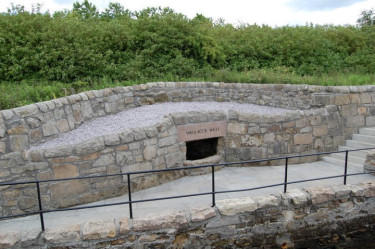 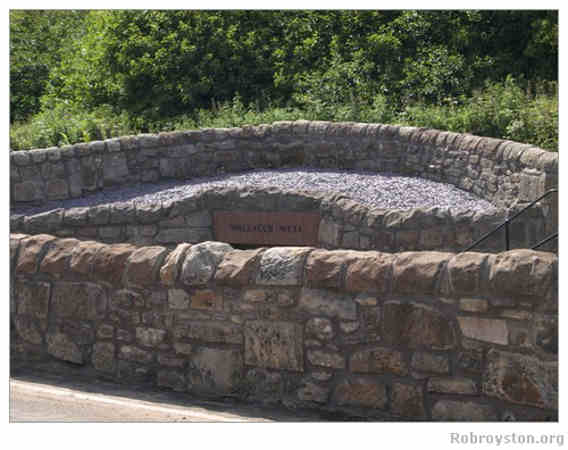 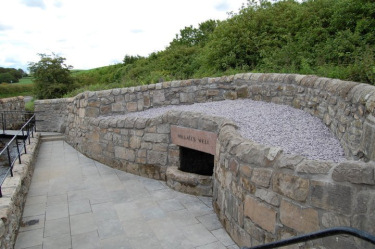 The Society of William Wallace (SWW) attended several meetings with the Glasgow City Council to express their concerns for the safety of the site at the Well, and the Memorial Cross. CWS Past Presidents John R. Wallace and William J. Wallace made many inroads with the Council at Robroyston by expressing the Society’s concerns. Their involvement and persistent inquiries to find the correct contact person or council to whom donations could be made surely aided in final decisions to restore the Well. They were also given the opportunity to review the plans for the Well restoration. Over the years these actions have resulted in the developer stepping up to perform the restorations to the Well to the benefit to Scots around the world.

The restoration finally began in June of 2011, and the final re-turfing of the Wallace Well site is complete. 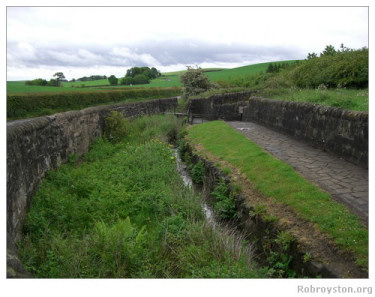 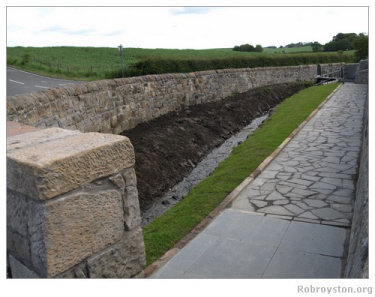 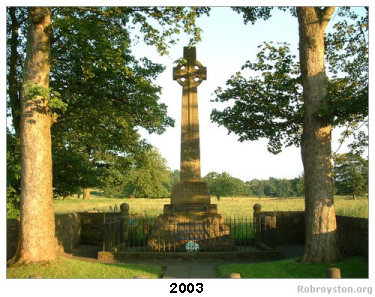 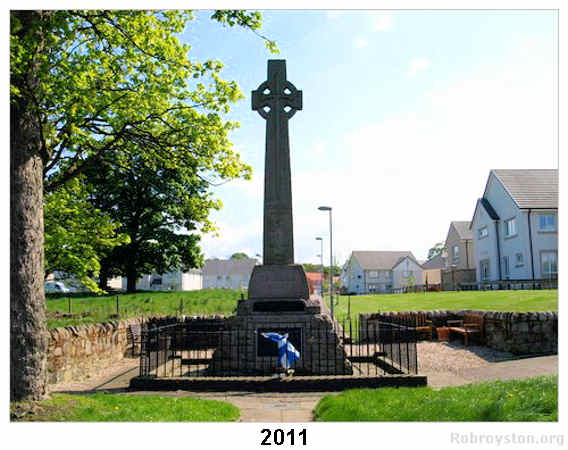 The following pictorial presentation shows history of damage incurred from weather, neglect, and vehicle traffic. There had been more damage since the Clan Wallace tour in 2005, believed to be from the developer’s bulldozer traffic. The pictures show the before and after physical state of the sites and results of the restoration process. The final step in the restoration is to build a walkway from the monument to the well, installing blue tiles and thistles in the garden patch, and the interpretation (signage). 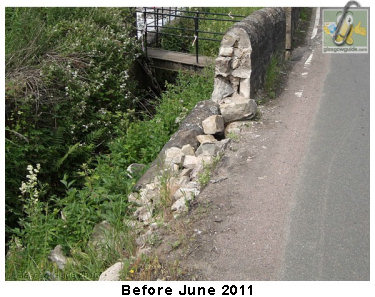 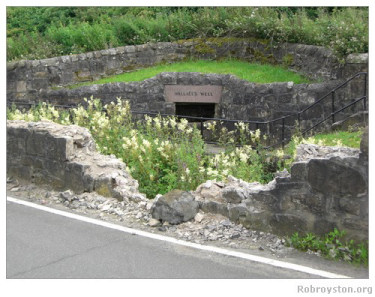 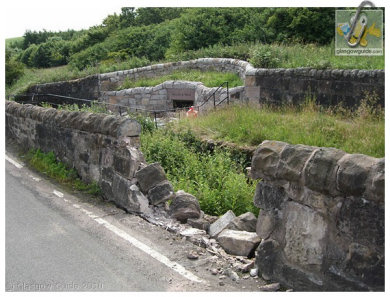 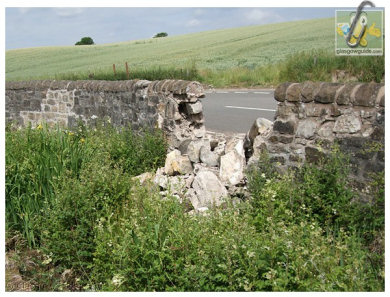 The wall along the roadway before May 2011 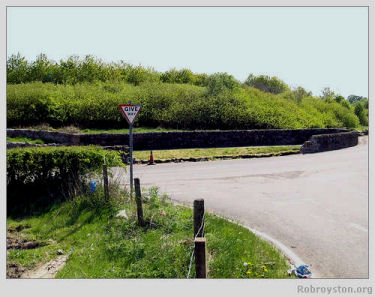 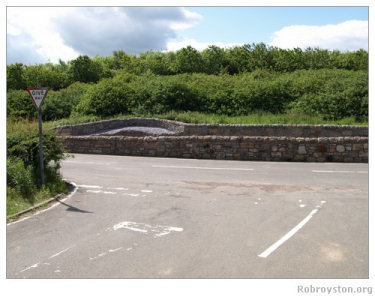 Across the T-intersection from the well, before and after. 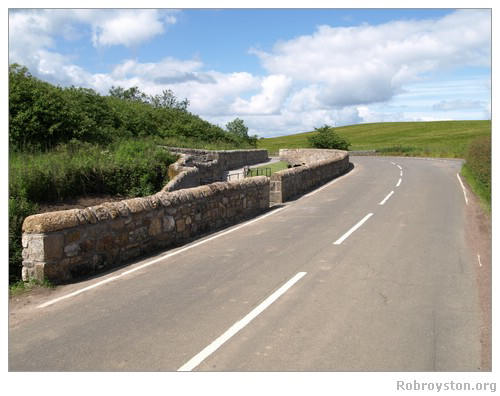 The roadway after June 2011 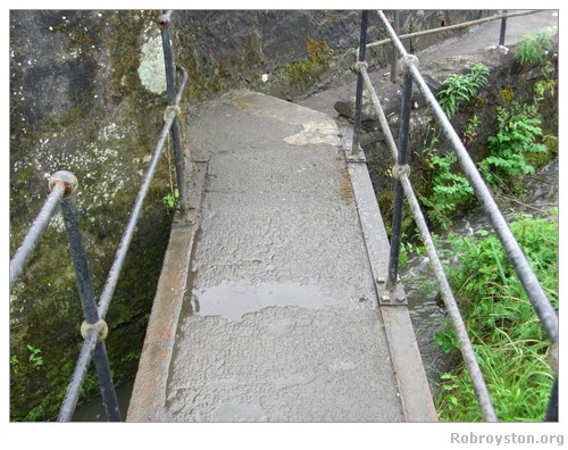 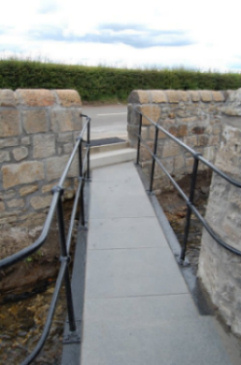 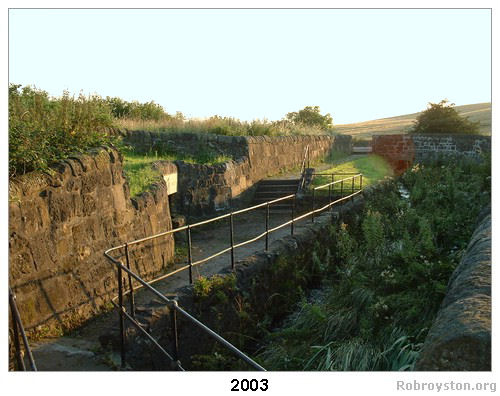 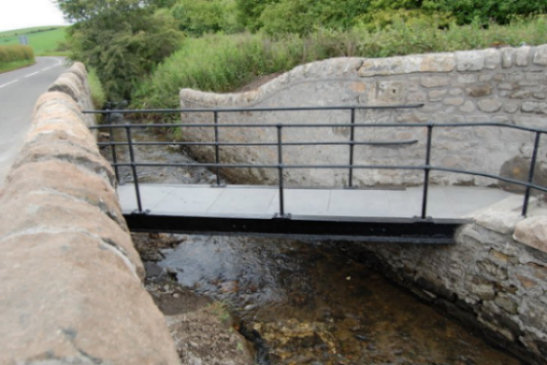 The walkway, before and after

Credit for photos used given to Robroyston.org Text and all other photos, Copyright © 2004-2011 Clan Wallace Society. All rights reserved.