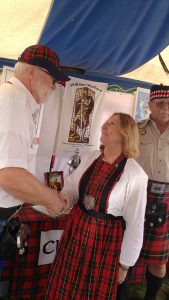 The Grandfather Mountain Highland Games (NC) was held on July 11,12,13,14, 2019. Overcast skies for most of the weekend, but the sun did come out to greet the ninety nine clan tents participating and Clan Wallace was among them. Also at the games are Scottish Tartan Museum, Council of Scottish Clans and Associations and Scottish Culture and St. Andrews Society of Upper South Carolina. Russ and Marcia Harper along with Larry and Judy Slight hosted the Clan Wallace tents.

These games are held at MacRae meadow on Grandfather Mountain, North Carolina. Thursday night Russ did the calling of, the Clan. Wallaces cheered as he yelled FREEDOM !!!!!!!!!!!!!!!!!

One of the special events that took place at the Wallace tent was that the Past President, Russ Harper presented the new President, Karen Wallace with the presidential metal, symbolling the passing of the torch from one to the other.

We had a special guest at the Games this year is Clan Chief Arabella Kincaid of Kincaid.

Our thanks to the many that came out and enjoy the weekend with us. Without YOU there is no Clan Wallace. Can’t wait to see you all next year!

CJ was commissioned from the ranks as an infantry cpl to infantry officer. Reclassified to intelligence officer and became the Army Chief Interrogator. Medically released due to wounds. Retired as major.

For your service and sacrifice CJ, the Clan Wallace Society salutes you.