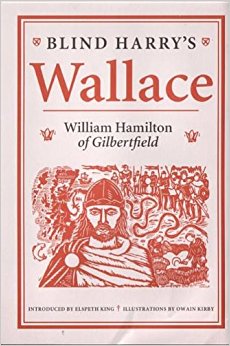 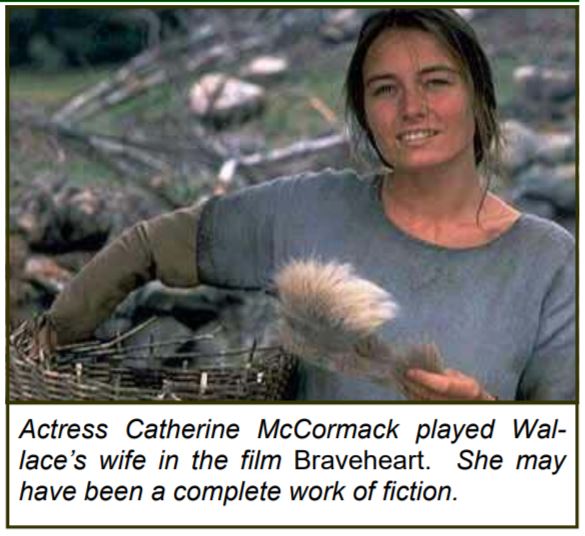 I do not know whether Marion existed or not, but I do know that Wallace’s right hand man was said to be William McKerlie and the McKerlies and the Braidfutes intermarried. I am a Broadfoot and I have visited the old kirk at Cruggleton where Braidfutes and McKerlies are buried together in the churchyard at the “foot of the hill” of Crugglton Caste. It is also written that Wallace assisted William McKerlie in his defense of Cruggleton Castle. There seems to be evidence that the McKerlies were close to Wallace and the McKerlies were also close to Broadfoots. I also know that several of the Broadfoots did live In Lanark, though I don’t know what year they came there. They also lived in Cruggleton and Isle of Whithorn, not far from Lanark.

Isle of Whithorn is, by Scottish standards, a long way from Lanark.

Nevertheless, Braidfute/Broadfoots did live in Lanark and Whithorn and all around that area of Southwest Scotland. Interesting if someone inserted the name Marion Braidfute into the legend of wallace. that he chose that family. Briadfutes were neither rich nor powerful nor famous. And by the way I have an extensive record of Braifutes that goes way back (in our family it is called the scroll) to the 1500’s and it shows these families living all around Southwestern Scotland. And I did visit most of those places when I was in Scotland and by car they were not that far apart. I suspect that the Scots who were used to traveling by foot would have had no problem moving wround through those parts. I believe many started off in Cruggleton.

Your post does fit together with many other posts about William Wallace and Marion Braidfute. It is well-documented that William Wallace was Catholic. He did had Catholic clergy as relatives and was educated in the Catholic faith. I just don’t think Marion was just Wallace’s lover, but that they may have been secretly married in the Church by one of His clergy relatives. Wallace’s clergy relatives would have looked askance at any out-of-marriage relationship between Marion and William because such a relationship would have been out of keeping with the Catholic Church. Because of all the strife with the British and the possibility that Sir William Heselrig wanted Marion to marry his son would have been all the more reasons for keeping it secret. I do believe that Heselrig found out and killed Marion because of this and because she would not reveal the whereabouts of William. I believe also that Heselrig was searching for Wallace and had issued a warrant for his arrest because he and possibly some of his followers had killed British soldiers who were taunting Wallace.

I realize that what I have just posted may be a leap of logic, but the more I read about William Wallace, the more many undocumented pieces of unpublished family history seem to fit together and make sense.

Braveheart is one of my favorite movies, if not my favorite. What’s most important is that the movie brought me to the “truth”, though it seems that isn’t completely known even still, sadly. I’m watching Braveheart again right now, years later and it once again got me interested in Scotland and William Wallace. I love this story, this history! (hope it’s ok that iI’m not a Wallace.)

Lol, gosh darn it Baillie ancestors.
Thanks for the good points. 🙂

Yeah. As much as I love so much that movie and I have cried so many times each time I watched it, this movie “Braveheart” of Mel Gibson is one of the MOST NON-HISTORICAL ACCURATE of all times!

If you read few books about the real hero (Wallace), you easily find out that Gibson simply had JUST TWO accurate facts for Scotland’s National Hero:

He was… William Wallace his actual name… and he fought for Scotland’s indipendence!!! All the rest in the film are “science fiction”!

Seriously, I don’t understand, when they making BIOGRAPHY FILMS for a specific HISTORICAL character who actually existed… why they ruining so much the story??? Producers/directors in the past made amazing job, for example the “Lawrence of Arabia” that was a triumph and so accurate for the notorious English commander Colonel T. E. Lawrence.

Anyways… best wishes from Greece, we love you guys (Scots).

Malcolm as the father of Sir William Wallace was given by Blind Harry, on his own or with assistance from Sir William Wallace in the 1470s who was the financial provider behind the book. That branch of the Wallace family died out about 1374. Detail on the seal attached to the Lubeck Letter written in November 1297 states it this way: “William Wallace son of Alan.”

Is Alan just a variation of Malcolm? – or – A reference to FitzAlan? I seem to have read this justification, so it would validate this tree to some extent.

Sir William Wallace was the son of Malcolm and Margaret Crauford.

Malcolm Wallace was the son of Adam Wallace and Euphemia FitzAlan Stewart.
Margaret Crauford was the daughter of Hugh Crauford and Alicia (???).

Adam de Waleys [Wallace], 4th of Riccarton, was the son of Adam Wallace, 3rd of Riccarton of Riccarton, and Christine Kilebane.
Euphemia FitzAlan Stewart was the daughter of Walter Stewart and Bethóc.

Is this the correct tree? – or – Is there a family lineage for Sir William Wallace that is more accurate?

Since the discovery of Alan Wallace of Ayrshire being William father. Historians have speculated on where William was born. One idea is Blackcrag Castle, which was 7 miles away on the drovers road from St Connals Kirk, and the settlement of Kirkconnel. This would have been the Wallaces local church. In the 13th century Kirkconnel was a tiny settlement at the foot of Kirkland Hill, straddling a burn. Braidfute in Scots means ‘foot of hill place’ or ‘foot of burn place’. There are still Broadfoots in the modern town of Kirkconnel.

The more likely scenario is that all three sons, Malcolm, William and John, were born at the estate managed by Alan Wallace, Auchincruive (or Hackencrow), just outside the village of Ayr. Alan Wallace attached his seal to the Ragman Roll of 1296 as a royal tenant in Ayrshire.

Thanks Robert for the additional information. I’ve been going through much of the old material and republishing it on the site.

Claims made in this piece should have been addressed a dozen years ago when first published in The Guardian. Blind Harry’s book was first published around the 1475-1480 period, quickly became the second best selling book in Scotland right behind the Bible. Harry died in 1492, according to historic records. Speaking of historic records, there is no known records to substantiate the existence of a Marion Briadfute; Dr. Rogers in his 1889 book stated that Sir William Wallace died unmarried and childless, current genealogy claims made on the internet notwithstanding. Given Sir William’s virulent dislike of the English, that alone may well have been sufficient reason for going after the Sheriff of Lanark, followed shortly thereafter by joining up with William Douglas to run off the Justiciar from Scone. As to history surrounding William Wallace, our guide at Stirling Castle in 2005 had it spot on when he told us “Braveheart,” the movie got two things right about Wallace: his name and his country!

[…] did exist in real life, his historical relevance was exaggerated, and the loss of his wife was invented to give it a dramatic twist. The real-life nickname “Braveheart” was given to King Robert […]