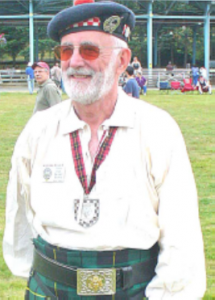 The Clan Wallace Society (CWS) is sad to inform its members that we have lost another good friend.  William (Bill) John Wallace passed away on the 15th of April at the age of 75 after a year-long fight with pancreatic cancer, departing from “this life to more life.”

Bill was born in Waupaca, Wisconsin. At the age of 20, he enlisted in the Army as a private, attended OCS and graduated a 2LT. In 1962, Bill met Norma Hoefer of Freeport, Illinois. They were married on June 6, 1964. Norma was the bedrock of his life. In the Gaelic, Norma was known as Bill’s anam cara (soul friend). Many times at CWS annual meetings and gatherings, you could see Bill and Norma walking hand-in-hand like they had just started dating, and they did so for their 53+ years of marriage.

With Norma at his side (sometimes figuratively), Bill completed two combat tours in Vietnam; one as a 1LT Infantry Heavy Mortar Platoon Leader; and one as a helicopter pilot with the rank of CPT. He also completed a three-year assignment to Saudi Arabia. Bill retired as Chief of Concepts and Studies Division, Director of Combat Development after 24 years in the Army with the rank of LTC.

Bill then worked in the Aerospace industry with McDonnel Douglas/Boeing for 16 years in management. He and Norma settled in Bend, Oregon in 2006.

Bill was a Council Member of the Clan Wallace Society and was elected to the Board of Directors. During his nine (9) year tenure on the Board, he was the Treasurer, Executive Vice President, and President from 2007 through 2009.

A celebration of Bill’s life took place at the First Presbyterian Church Sanctuary in Bend, OR on Saturday, April 21, 2018. Bill will be interred in the columbarium of Arlington National Cemetery in Virginia at a future date to be announced. Bill will be greatly missed by his loving wife Norma and their family and friends. He will also be missed by his CWS family. We bid farewell to a good man and a good friend.