The Dixon Scottish Highland Games have been going on for 18 years in beautiful Dixon California.  The games were held on September 29th 2018 in the Dixon Fairgrounds. 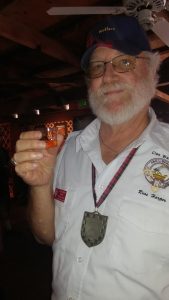 Thirty four clans showed up at the fairgrounds for a wee bit O’ Scotland. The Clan Wallace tent was hosted by Russ and Marcia Harper. We were honored to have join us for the weekend, Deanna Lopes general manager of the games and a member of Clan Wallace.

Along with Scottish Athletics they also hosted women’s Rugby matches. Every now and again a stray ball would come into the clan tents. Heads up!

The games hosted living history exhibits of Scottish history reenactors where you could view their encampment, Vikings and Army of Montrose Free artillery, 79th New York Highland were also present.

The entertainment for the games Flask, Tempest, Michael Mullen’s Trio of one.

Something special to these games is a Scottish wedding renewal of vows. Couples may renewal their wedding vows Scottish style.

Thank you so much for all that came out and joined us for the weekend.  We can’t do the games without your support.