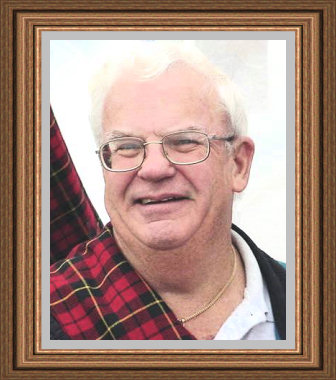 William Wayne Wallace departed this earth on July 29, 2011 in the presence of his loving wife.  He was born February 15, 1939 in Belton, Texas. His birth was on the White Family Farm in Bell County.

Wayne attended Texas A&M University and graduated with honors in 1963 with a degree in Engineering.  He later received his Professional Engineer License and worked for 13 years with Aramco in Saudi Arabia, before he retired.  He was actively involved with the Southwest Texas Archeological Society.  He was a Council Member of the Clan Wallace Society Worldwide and a Convener in Texas for many years.  He was the brother to Past President Marcus “Jim” Wallace, and uncle to current Secretary and Board Member, Donna Kay Wallace.

Wayne was a quiet man with that slow Texas drawl, and unique in his love of family and friends.  He was a Patriot, Conservationist, Adventurer, and a proud man of our Heritage. He had a keen interest in nature and her history.  He is survived by four children, 12 grandchildren, and four great-grandchildren.  He is much loved by his family and will be dearly missed. 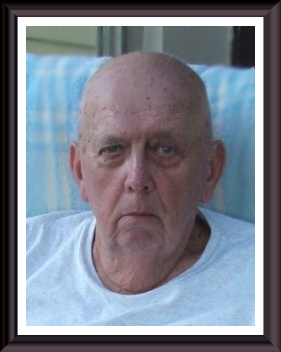 Richard W. Wallis Sr. passed away at home with his family by his side-July 14, 2011.  He was 74.  He was a member of Clan Wallace Society since the late 90’s.  He worked for Greyhound Bus Lines as a freight/baggage handler.  Richard was also a poultry farmer for about 30 years, some of it at the same time as his greyhound job.

He was a 50 year member of the Free & Accepted Masons-Lodge 371.  Richard or “Turtle” to his friends was an active member of his church, in the choir and co-chair of their Apple Butter Boil committee.  He was well-known and loved in the Liverpool, PA community and would always be there to help a friend in need.

He loved golf, watching sports and spending time with his family.  He is survived by his wife of 49 years Sandra, and his 3 adult children-Bob, Tim, and Richard Jr., who convenes the PA area Games.

We were saddened to learn of the passing of Clan Wallace Society Lifetime member Laurie Isdell on April 29, 2011.  She had been battling breast cancer for the past five years. Laurie is survived by her husband Dan. Dan & Laurie were very active convening Clan Wallace Society tents at games & festivals in central California.  A celebration of Laurie’s life was held at the Sacramento Valley Scottish Games & Festival in Woodland, CA on Saturday, May 7, 2011.

Roger William Wallace was born on June 14, 1923 in Las Vegas, New Mexico and passed away on December 19, 2010 in the Albuquerque, New Mexico area.  The family of Roger thanks their many friends and relatives whose sympathy and thoughtfulness will always be remembered and deeply appreciated.

“I have known Roger and his family since 1996.  He was very proud of his Scottish heritage. His grandfather emigrated to New Mexico from Scotland.  He was proud of his family and especially his daughters, Sandra and Patricia.

Roger was a Director of the Clan Wallace Society 2000– 2002.  He was very appreciative of the policy which allowed anyone with an interest in Scottish history, it’s influence on America, and a belief in the principles of this society to become a member. He enrolled many members of his family as Council Members.

Roger served for 5 years in the European Theater during WW II.  He was a truck driver and participated in the “Red Ball Express.”  After the war he was an organizer for the Teamsters Union.  He started in the Western Conference and then was promoted to Director—Food Processing and Cannery Central Division.  He remained a consultant for the Teamsters Union after his retirement.

He is missed by all who knew him.  Although his health prevented him from traveling to games the past few years, he remained an enthusiastic supporter of the activities of Clan Wallace Society (Worldwide).”

Annual Member Thomas Benjamin Wallace of Converse, TX.  He served in the Korean War and two tours of duty in Vietnam where he received the Purple Heart. He retired in 1970 and is survived by his wife Gerry.

Full Military Memorial Service was held on April 3, 10am at Ullrey Chapel in Marysville, CA

Long time Clan Wallace Society Worldwide Council Member James Harrison Wallace, 61, of Greenville, Kentucky died Monday, Nov. 9, 2009, at Muhlenberg Community Hospital in Greenville. He was born Sept. 29, 1948, in Hammond, Ind., was a veteran of the U.S. Navy, a phlebotomist and a member of First Christian Church, Greenville.  Jim, along with several members of his family, was active in Scottish Affairs and participated at Games and Festivals in the Midwest, being a regular at the Glasgow Kentucky Highland Games.  His absence will be felt by those who knew this pleasant and interesting gentleman. Jim was preceded in death by grandson, Silas Harrison; parents Paul and Ione; and brother Joey.

William B. (“Bill”) Wallace passed away quietly in his sleep at the age of 91 on the morning of Wed. May 20, 2009, after a brief but precipitous decline following complications from a stroke.

Bill was a lifelong patron of the arts, & enjoyed jazz band & choir concerts, theatre, ballet & dining in Manhattan, NY for many years before enjoying the same, on a smaller scale, upon his retirement to McMinnville, Oregon at the age of 86.

His first job was as a “Bobbin boy” at the Coates & Clark Thread Co., & he spoke fondly of the opportunity to work & live a rugged, outdoor life as a teenage member of the Civilian Conservation Corp (CCC’s) in Idaho during the Depression.

He had a long career as a precision toolmaker, machinist & aerospace manufacturer.  Among his contributions to early rocketry, Bill helped design & build the X-15 rocket engine & the Lunar Excursion Module.  He was founder & President of his company, Mechanical Laboratories, Inc.

Bill had a life-long love of music.  He was an accomplished drummer, and dabbled in piano & “vibes”. While playing at an event, Bill met & fell in love with the darkly beautiful Teresa Morman.  They eloped on the train to Maryland, but found on their return that the event was not received well by either sets of parents.  They were married (again!) on July 13, 1941 at St. Cecelia’s Roman Catholic Church in Kearney, NJ.  They had six children.

Bill participated in the Allied Invasion of Normandy in WW II as an engineer with the Merchant Marines supply fleet.

Bill will be remembered warmly for a generous heart, a forgiving spirit and for his cosmopolitan taste in clothes, food and jazz.  He had a vibrant and playful sense of humor, & often spoke of his namesake, William Wallace.  He spoke of being one in a 400 year line of Williams born to Jameses born to Williams, & deeply treasured his Scottish roots.  On a recent visit to the Highland Games in Oregon, Bill met the President of the Clan Wallace Society & was delighted to learn he may very well have been the oldest member of the Clan in America.

Born in Little Rock, Arkansas, October 12, 1935 to Thelma Fox Schmelzer and Anthony Schmelzer Jr., Jim Schmelzer died peacefully in the afternoon on March 28, 2009 of cancer after a long illness. He leaves no immediate family but many, many good friends. Jim was an active Council Member of the Clan Wallace Society Worldwide, a member of The St. Andrew Society of Baltimore, a Knight in the Order of Sao Teatonio, and a Knight Commander in the Priory of St. James of Jerusalem of the Sovereign Military Order of the Temple of Jerusalem; also known as the Knights Templar.
Jim got his bachelor’s degree from University of Arkansas; Masters from Northern Illinois in DeKalb and worked on his PhD at the University of Maryland at College park; he then taught Art and Art History in Arkansas, Iowa, Illinois, and retired from Montgomery County, MD. He loved life, cooking, dining, theater, his friends, and all things Scottish. We will miss you Jim.

In lieu of flowers, he asked you to contribute to your favorite school or environmental group, such as The Nature Conservancy or The Chesapeake Bay Foundation. 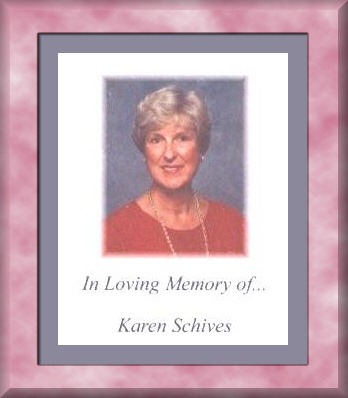 CWSW member, Karen Schives, 66 of Chatham Ontario passed away December 28, 2008 after a lengthy illness.  Karen leaves her husband Bob, 3 daughters, and 4 grandchildren.  She was the sister of CWSW member Beverly Rock of Fergus, Ont. and cousin to CWSW Canadian Commissioner Dorothy Wallace Knight. of Woodslee, Ontario.