The Grandfather Mountain Highland Games (NC) was held on July 6,7,8,9, 2017.  Rainy Friday to start off the weekend but the sun did come out to greet the eighty clan tents participating and Clan Wallace was among them.  Also at the games are Scottish Tartan Museum, Council of Scottish Clans and Associations and Scottish Culture and St. Andrews Society of Upper South Carolina and the Society of William Wallace.  Russ and Marcia Harper along with Larry and Judy Slight hosted the Clan Wallace tents.

These games are held at MacRae meadow on Grandfather Mountain, North Carolina.   Thursday night Russ did the calling of, the Clan.  Wallaces cheered as he yelled FREEDOM !!!!!!!!!!!!!!!!! 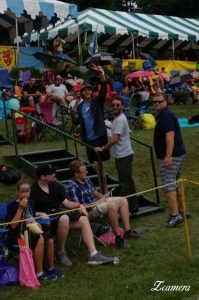 We had a special guest at the Games this year, Actor Cesar Domboy currently of “Outlander” fame, as the adult Fergus.

For the 3rd year at Grandfather Mountain, we had women athletes competing in the games. Amy Jenkins proudly wears the Wallace green when she competes. Go Amy!!!!

Our thanks to all that came out and enjoy the weekend with us. Without YOU there is no Clan Wallace. Can’t wait to see you all next year!