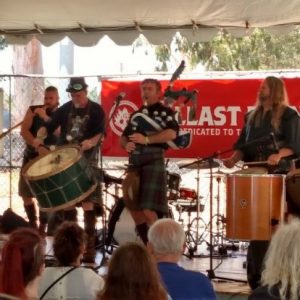 he air was filled with the sound of bagpipes at the 44th Annual San Diego Scottish Highland Games and Gathering of the Clans the weekend of June 24-25. Located in the quaint hills of Vista, California. One of the smaller events in southern California, it provides a friends and family venue that can’t be beat.

Scottish culture filled the park during the two day festival, which featured a variety of activities and entertainment for guests of all ages: Sheepdog trials, Highland dancing, Scottish vendors, cuisine and beverages, bagpipe and drumming competitions, clan heritage tents, and hands-on children’s activities.

The festival’s popular beer garden–recognized by San Diego Magazine as the Best Beer Garden in North County–was a gathering place for attendees to sample flavorful beer varieties, while mingling with friends old and new.

The booth was visited by Wallace families from as far as Omaha, Nebraska and Cedar Rapids, Iowa. Twelve signed the registry with two visitors interested in becoming involved with the Clan Wallace Society. 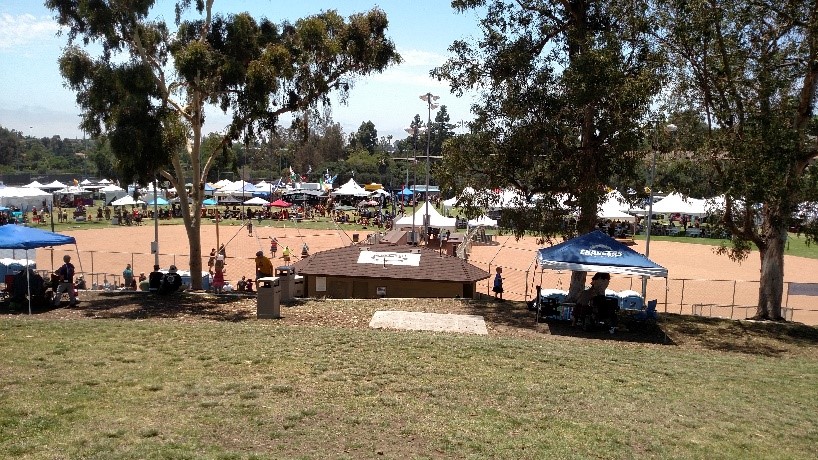 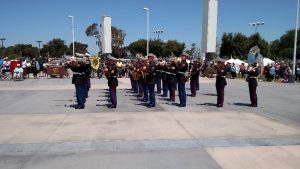 Slated as the largest clan gathering in Southern California, Scottish Fest is an event that should not be missed. With two beautiful SoCal days, Scottish Fest 2017 was not left wanting.

Salute to Veterans services were held on both Saturday and Sunday. A tribute to those who serve and remembrance of those who are no longer with us. Performances from the Third Marine Aircraft Wing Band, Los Angeles Police Emerald Society Pipes and Drums, and Los Angeles Fifes and Drum were the highpoints the services.

The booth was located at the main event entrance which provided easy access for over 100 visitors. Sixteen signed the registry with four visitors interested in becoming involved with the Clan Wallace Society.  This year the Wallace booth hosted the late Edward Grant Ries’ Templars sword which was returned to the Knights Templar on Sunday morning.  A special thanks to Pat and Nikki Schuller who drove all the way from Phoenix, AZ to help.

The Greater Greenville Scottish Games (SC) was held on May 27, 2017.  Bright sunny skies and 80 degree weather, greeted the forty two clan tents participating and Clan Wallace was among them.  Other participants included the SAMS (Scottish American Military Society) , Council of Scottish Clans and Societies and Scottish Culture and St. Andrews Society of Upper South Carolina.  Russ and Marcia Harper along with Megan Fischer hosted the Clan Wallace tent.

This years’ game had the added theme of a tribute to our Military Heroes.  One of the highlights of the tribute was the Royal Highland Fusiliers just recently returned from Afghanistan.  The Royal Highland Fusiliers (Princess Margaret’s own Glasgow and Ayrshire Regiment) was a regular Scottish Division, and abbreviated as ‘The RHF’.  The regiment was formed on January 20, 1959 by the then amalgamation of the Royal Scots Fusiliers, with Highland Light Infantry (City of Glasgow Regiment).  The other highlight was having The US Army Special forces paratroopers land in the center of the field with flags.  The 2d Marine Division Band was also part of the Tribute to our Military Heroes.

The parade of tartans was held at nine before opening ceremonies. Special guest was Hon. Alexander Leslie the earl of Rothes clan chief of Leslie.

Special thanks to Megan Fischer, Frank Randall, Susanne Dykes and Laura Carr and to all that came and hung out at the Wallace Tent.  We can’t do this without you.