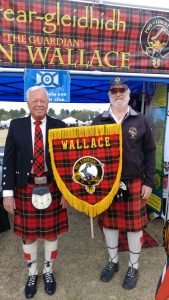 The 8th annual Tartan Day South (SC) was held on March 24, 2018. Sunshine and cold temperatures on Saturday greeted the fourteen clan tents participating and Clan Wallace was among them. Russ and Marcia Harper hosted the Clan Wallace tent.

Carolina British Classic cars, Medieval Encampment, Kids Rides and Quidditch where just some of the things you could enjoy. The festival included athletics both men and women, Scottish dancing and Irish dancing, Children’s games face painting and storytelling, and three pipe bands.

What a great weekend we had. A special thanks to Ned Wallace who came out to enjoy the day with us.