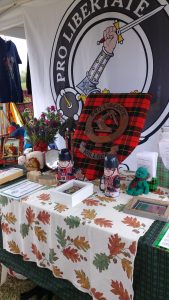 The 9th annual Tartan Day South (SC) was held on April 6, 2019. Overcast skies, and cool temperatures on Saturday greeted the twelve clan tents participating and Clan Wallace was among them.   Russ and Marcia Harper hosted the Clan Wallace tent.

The festival included athletics, both men and women, Scottish dancing and Irish dancing.  Children’s activities modified heavy athletics, face painting and storytelling. The entertainment included Syr, Brynmor, and Tuatha Dea. Four pipe bands rounded out the Scottish fanfare. Also on display was Carolina British Classic cars and Quidditch match were some of the things you could enjoy

Special Guest was Dr. Bruce Durie, accomplished author, broadcaster, lecturer, and an expert genealogist and heraldists. Dr, Durie has been awarded a Fulbright Senior Scottish Studies Fellowship, and has researched Lowland Scots migration to the Carolina, for seven months in 2016.  Dr. Durie has a new book out, “Your Scottish-American Ancestry”, in this book is a chapter on “We’re descended from William Wallace”.  This is an easy read and guide book on searching your Scottish roots.

The parade of tartans was at noon. We were honored to have March with us, Ted Wallace.

What a great weekend we had.  Thanks to all that came out to enjoy the day with us.