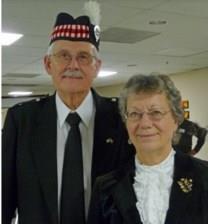 Over the course of his adult life, Bill served in the U.S. Army, two of those years in Germany. Later in civilian life, he joined Clan Wallace Society, assisting at Games and convening on occasion. Bill was part of the group attending the Gathering in Estes Park in 2009. In addition to his Clan Wallace association, he was part of the Northwest Scots Honor Guard, including serving as commander, presenting our nation’s colors at parades and Scottish events across the Pacific Northwest.

A memorial service was held for Bill on December 2, 2018 at the Rockwood Seventh-day Adventist Church in Gresham.