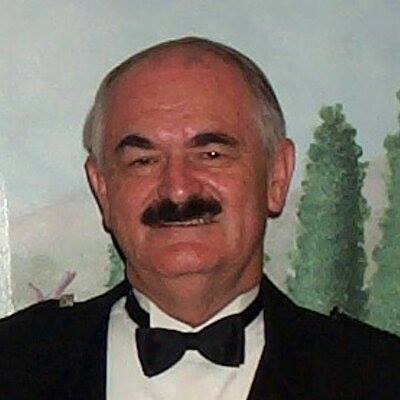 Ed was known to many in the Southern California Scottish Community, and served as the convener for Clan Wallace for many years. For several years, he served as part of the Color Guard in the Salute to Veterans at Scottish Fest USA, over Memorial Day weekend, at the Orange County Fairgrounds in Costa Mesa, where he will be accorded honors this year.

Ed wrote several excellent historical novels over the past few years, all of which are available through Amazon. He held a PhD in engineering, and taught at university level, as well as working in the private sector.

His first book was entitled ‘Legacy of Honor’; a fitting one, for such a gallant gentleman.

Ed was a devoted husband, father, and friend.

Semper Fi Skipper! Your duty here is completed.  Your next and final duty station, will be at the Gates of Heaven. 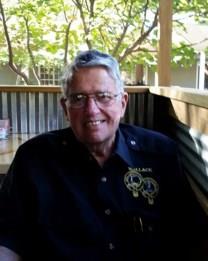 It is with much sadness that we report past president of the Clan Wallace Society Jim (Marcus) Wallace passed on July 16, 2016.  Marcus J. (Jim) Wallace Jr. was born in Port Neches, Texas in 1937. He spent most of his early life in Texas where he graduated from Port Neches High school. Then he went on to continue his education and graduated from Texas A&M, school of Engineering. Yes, Dad was an Aggie! He told and loved Aggie jokes with the best of ’em. He moved to California after college when he joined the Coast Guard. After a few years of active duty, he became a reservist and then got a job with the phone company and moved to Houston, then to St. Louis and finally settled in Oklahoma City for a long career with Southwestern Bell Telephone Company. I think his heart was always in Texas though. He loved the people, the food and Aggie football! He married Janet Sue Sampson and they raised 2 children, Donna and David. He moved back to Texas a little over a year after Mom passed away to be close to his family and especially his grandkids. Jim enjoyed cooking, grilling outdoors and making unique dishes and not telling you what it was until after you ate it. Dad had a mischievous side that was fun to see. Corinth, TX is where he lived out his life, enjoying genealogy and trying to track down long lost family. He republished several books about William Wallace, participated in DNA studies, loved traveling to and attending Scottish games in the US and Canada while representing Clan Wallace. A special place in his heart was spending time with his children and grandchildren Heather, Joshua and Johnathan and his two (soon to be three) great grandchildren Jordan, Finnleigh and one on the way. Jim passed away on July 16, 2016. He will be dearly missed. Whenever I see a can of kipper snacks or lately vanilla bean shakes from Sonic, I will think of you Dad. Going to Mi Terra and traveling the back roads will never be the same. We will make one more trip to OK and place you beside Mom. We love you. The family asks in lieu of flowers you send a donation to the Central Texas Area Museum – Salado, TX